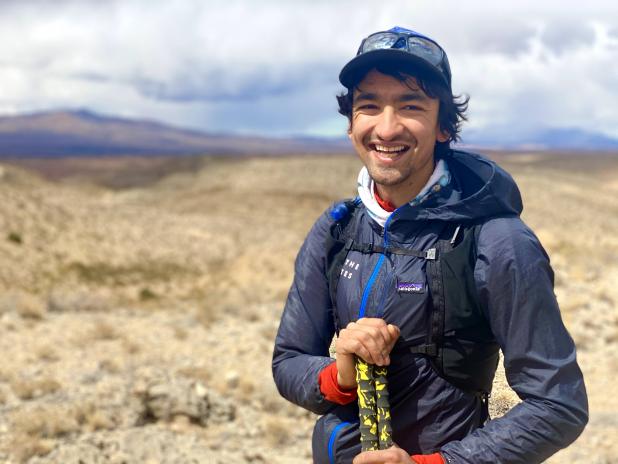 Cramer, focused on the inequities in healthcare and other technologies, has worked on everything from portable radiography tools to seismology research.

The past school year, with its primarily online learning format and pandemic-fueled lack of in-person experiences, has been a challenge for students everywhere, including those graduating from the Harvard-MIT Health Sciences and Technology (HST) program. But Avilash Cramer, one of this year’s HST Medical Engineering and Medical Physics (MEMP) PhD graduates, says that despite all the challenges, he feels “so fortunate and so lucky.”

Cramer, who defended his thesis in October, is already working as a staff scientist in Socorro, New Mexico, specifically, as a Polar Projects Field Engineer at the IRIS/PASSCAL seismology research facility affiliated with New Mexico Tech. Cramer, who grew up in Oregon, received his ScB in physics from Brown University, and a master’s degree in electrical engineering and computer science from MIT.

For Cramer, the choice to come to HST came down to the clinical aspect of the HST curriculum. Previously, he had worked as an EMT; he had also spent time in India as a Fulbright Scholar, working on medical device design at the Aravind Eye Hospital in Madurai.

At HST, he was drawn to the lab of Dr. Rajiv Gupta, director of the Advanced X-ray Imaging Services (AXIS) Center at MGH, whose lab is working to develop safer and more accessible radiography tools. Gupta became his advisor, and in his research, Cramer focused on the next generation of computed tomography (CT) hardware. Cramer says that while CT is the clinical standard for diagnosing many emergent medical conditions, such as stroke and traumatic brain injuries, these systems are large and unwieldy, and therefore, are often unavailable to patients outside of major trauma centers. Cramer’s goal is to develop systems that are more portable and accessible for pre-hospital care.

“I am working on systems that you could put in an ambulance or a helicopter,” Cramer says. “Even if you live in a rural area, you should have access to the same level of healthcare as those in more densely populated places.”

Over the final few months of his time at HST, as Covid-19 continued to rage, Cramer joined a group of HST students, and others, looking for effective and innovative ways to use their skills to mitigate the threats to healthcare workers on the frontlines fighting the pandemic. Calling themselves the Greater Boston Pandemic Fabrication Team (PanFab), the group of volunteers worked on various ways to address the early shortage of safe personal protective equipment (PPE). With his background in X-ray devices and radiation physics, Cramer joined a team of scientists and clinicians developing a system for respirator sterilization.

“Everyone in HST just kind of dropped what they were doing to help as best they could (with Covid-related research),” Cramer says. “It was really gratifying to work on the respirator project, and it became some of the work I am most proud of. I got to see it implemented in the clinic—and it was wonderful to think I was helping some of my healthcare colleagues who were working on the frontlines…my previous five years at HST had made me well-positioned to take on a project like that.”

While admitting that finishing his degree and starting a new job during a pandemic has not been easy, he says he “feels nothing but gratitude.”

At New Mexico Tech, Cramer is working on portable seismology instrumentation, designing research stations for experiments in Antarctica and Greenland. These systems support studies of changes in the ice sheets, and the activity of polar volcanoes.

“I always had an interest in climate studies, and in climate change, and one thing I have grown to appreciate is that the climate crisis is a human health crisis too,” says Cramer, who was a graduate student representative on MIT’s Climate Action Advisory Committee. “My research into the inequities of healthcare access is not that different from what I am doing now­—I am again designing equipment that can go in a helicopter to somewhere remote. At the end of the day, it is just moving electrons from place to place.”

Due to Covid, the 2020/2021 Antarctic summer research season was heavily curtailed, so Cramer missed his first chance at a field deployment. But he hopes to go soon. In the meantime, he says he has some “amazing” memories of his time at HST. These include an opportunity to do field work on a Navajo Reservation and traveling to South Africa as a teaching assistant for the IAP class HST.434: Evolution of an Epidemic, taught by Bruce Walker, a professor of the practice at the MIT Institute for Medical Engineering and Science (IMES), and director of the Ragon Institute of MGH, MIT, Harvard (IMES is HST’s home at MIT), and Dr. Howard Heller.

And finally, there was that time that Emery Brown (associate director of IMES, co-director of HST, and a professor of anesthesia at Harvard Medical School, and Massachusetts General Hospital) and a fellow HST MD student, Angela Zhang, were on his care team when he needed an emergency appendectomy in 2017. “I’m grateful to them both,” he says, with a laugh.