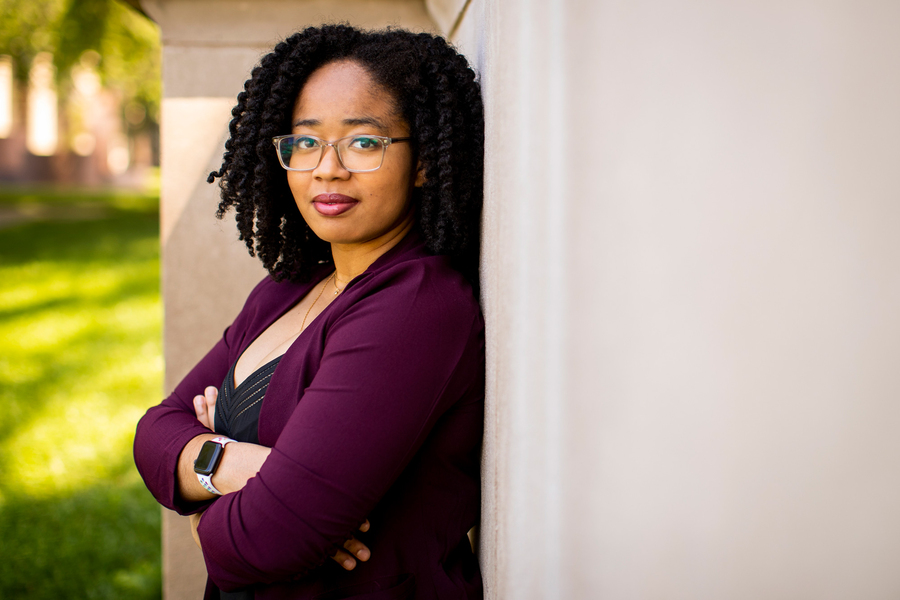 MIT PhD student Jordan Harrod is a scientist, writer, policy advocate, and YouTuber. She uses machine learning as a tool for studying pain and consciousness — and as subject matter for her popular videos.

This HST MEMP PhD student uses machine learning as a tool for studying pain and consciousness — and as subject matter for her popular videos.

Scientist, writer, policy advocate, YouTuber—before Jordan Harrod, an HST Medical Engineering and Medical Physics (MEMP) PhD student—established her many successful career identities, her first role was as a student athlete. While she enjoyed competing in everything from figure skating to fencing, she also sustained injuries that left her with chronic pain. These experiences as a patient laid the groundwork for an interest in biomedical research and engineering. “I knew I wanted to make tools that would help people with health issues similar to myself,” she says.

Harrod went on to pursue her BS in biomedical engineering at Cornell University. Before graduating, she spent a summer at Stanford University doing machine-learning research for MRI reconstruction. “I didn’t know anything about machine learning before that, so I did a lot of learning on the fly,” she says. “I realized that I enjoyed playing with data in different ways. Machine learning was also becoming the new big thing at the time, so it felt like an exciting path to follow.”

Harrod looked for PhD programs that would combine her interests in helping patients, biomedical engineering, and machine learning. She came across the Harvard-MIT Program in Health Sciences and Technology (HST) and realized it would be the perfect fit. The interdisciplinary program requires students to perform clinical rotations and take introductory courses alongside medical students. The MIT Institute for Medical Engineering and Science (IMES) is HST's home at MIT. “I’ve found that the clinical perspective was often underrated on the research side, so I wanted to make sure I’d have that. My goal was that my research would be translatable to the real world,” Harrod says.

Mapping the brain to understand consciousness

Today, Harrod collaborates with professors Emery Brown, who is the associate director of IMES, and the co-director of HST, as well as an anesthesiologist, and Ed Boyden, a neuroscientist, to study how different parts of the brain relate to consciousness and arousal. They seek to understand how the brain operates under different states of consciousness and the way this affects the processing of signals associated with pain. By studying arousal in mice and applying statistical tools to analyze large datasets of activated brain regions, for example, Brown’s team hopes to improve the current understanding of anesthesia.

“This is another step toward creating better anesthesia regimens for individual patients,” says Harrod.

Since beginning her neuroscience research, Harrod has been amazed to learn how much about the brain still needs to be uncovered. In addition to understanding biological mechanisms, she believes there is still work to be done at a preliminary cause and effect level. “We’re still learning how different arousal centers work together to modulate consciousness, or what happens if you turn one off,” says Harrod. “I don’t think I realized the magnitude or the difficulty of the challenge, let alone how hard it is to translate our research to brains in people.”

“I didn’t come into graduate school with a neuroscience background, so every day is an opportunity to learn new things about the brain. Even after three years, I’m still amazed with how much we have yet to discover.”

Sharing knowledge online and beyond

Outside of the lab, Harrod focuses her time on communicating research to the public and advocating for improved science policies. She is the chair of the External Affairs Board of the Graduate Student Council, an Early Career Policy Ambassador for the Society for Neuroscience, and the co-founder of the MIT Science Policy Review, which publishes peer reviewed reports on different science policy issues.

“Most of our research is funded by our taxpayers, yet most people don’t necessarily understand what’s going on in the research that they’re funding,” explains Harrod. “I wanted to create a way so people could better understand how different regulations affect them personally.”

In addition to her advocacy roles, Harrod also has a dedicated online presence. She writes articles for Massive Science and is well-known for her YouTube channel. Her videos, released weekly, investigate the different ways we interact with artificial intelligence daily. What began as a hobby three years ago has developed into an active community with 70,000 subscribers. “I hadn’t seen many other people talking about AI and machine learning in a casual way, so I decided to do it for fun,” she says. “It’s been a great way to keep me looped into the broader field questions.”

Harrod’s most popular video focuses on how AI can be used to monitor online exam proctoring. With the shift to online learning occurring during the pandemic, many students have used her video to understand how AI proctors can detect cheating. “As the audience grows, it’s been exciting to read the comments and see people get curious about AI applications they had never heard of before. I’ve also gotten to have interesting conversations with people who I wouldn’t have come across otherwise,” she says.

In the future, Harrod hopes to find a career that will allow her to balance her time between lab research, policy, and science communication. She plans on continuing to use her knowledge as a scientist to debunk hype and tell truthful stories to the public. “I’ve seen so many articles with headlines that could be misleading if someone only read the title. For example, a small study done in mice can be exaggerated to make mind-reading technology seem real, when the research still has a long way to go.”

“Since making my YouTube channel, I’ve learned it’s important to give people reasonable expectations about what’s real and what they’re going to encounter in their lives. They deserve to know the full picture so they can make informed decisions,” she says.