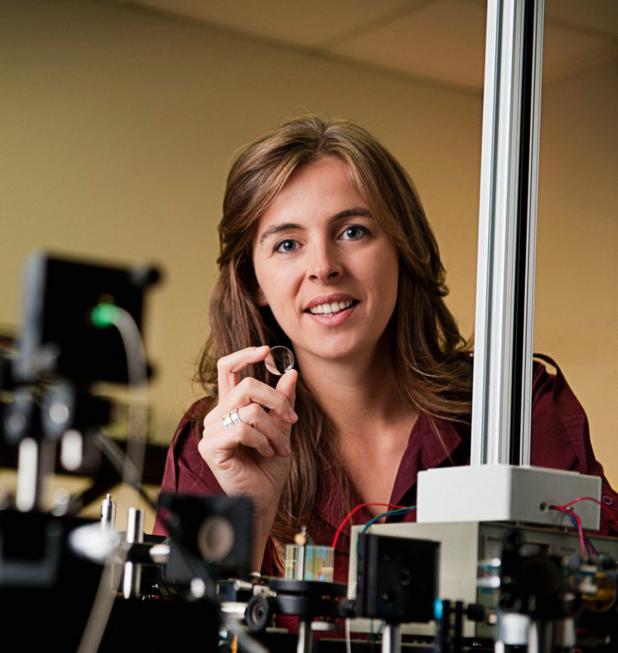 MENTORSHIP FOR THE WIN

“If you cannot see where you are going, ask someone who has been there before.” ~ J. Loren Norris

If you ask Caroline Boudoux what influenced her most during her time as an HST student, she says her most meaningful takeaway was the importance of finding the right mentors. She emphasizes that multiple mentors are needed for different aspects of life. “You can’t expect one person to have all of the experiences that you need for your life.”

For Caroline, this awareness of the need to learn from colleagues and advisors would be the key to success not only during her time at HST, but also currently as an Associate Professor at the Ecole Polytechnique de Montreal and as a co-founder and co-president of Castor Optics—a company that makes fiber optic couplers specifically designed to meet unique medical needs all over the world.

Caroline was fortunate to start her career with mentors from her own home. Her mother was trained as a pharmacist and her father worked in a research laboratory. She said, “My mother always had a good explanation for how the human body worked.” And her father was the one who urged her to pursue engineering physics.

With the advice of her parents and propelled by her own strong passion for math and physics, Caroline studied both physics and engineering as an undergraduate with the goal of later applying her knowledge to the medical field, which had always fascinated her.

After Caroline finished her undergraduate program, she decided to explore programs offered at Harvard and MIT out of curiosity, not thinking that she’d actually apply and be accepted. But when she learned about the HST program, she said “this is exactly what I want to do and for a brief moment I thought that someone had designed the program just for me. I thought, someone understands!” Finding the HST program was a dream come true for Caroline as it enabled her to couple her engineering physics expertise with the medical world.

At HST, Caroline found a unique set of mentors to help shape her research and inform her future. Her primary advisor was Dr. Brett Bouma, and she also worked closely with Dr. Gary Tearney. Caroline said, “Because of the HST program, I had fantastic mentors in Drs. Bouma and Tearney. Gary showed me that the sky is not the limit. I’ve seen Gary accomplish things. It’s still a driver for me. When I have a student who thinks something is impossible, I go back to seeing what Gary can do and the speed at which he could accomplish things—it was surreal. Brett was (and still is!) a scientific mentor. He is a source of knowledge and when he doesn’t know something, he goes further, from a science and personal perspective. Brett is an absolute guru.”

Working with Drs. Bouma and Tearney, Caroline discovered a passion for microscopy hardware. The professors had an idea to miniaturize a confocal microscope to make it adaptable to the constraints of endoscopy. Caroline worked on several pieces of hardware that would ultimately result in the miniaturization of confocal microscopy. This work informed her thesis, lay the ground work for her specialization in fiber optic couplers, and later led to the founding of Castor Optics.

Up to the early 2000s, endoscopies were performed with fiber optics designed for telecommunications. This was great for the “first proof of principal and the low-hanging fruit,” but these fiber optics were not designed for the nuances biomedical imaging required. With the experience Caroline gained in medical coursework at HST, she designed new instruments with the constraints of medical imaging in mind.

GENESIS OF THE FIBER OPTICS COUPLER
Caroline says, “If I were to single out one element where I believe our research has had an impact it would be the fiber optics coupler, which is the fiber optics assembly that allows the combination of different modalities within the same instrument.”

Caroline’s lab has made a “completely fiber integrated system from the laser to the detector going through a patient without having to go through free space, making systems that are more sensitive. Some of our couplers can extract up to 100x more light and also they are more robust. There’s no sensitivity to vibration.”

Caroline hopes that the technologies she has developed will impact a variety of medical needs. “From [my experience in] the HST program, it was very clear that for every organ type someone needs to dedicate their career. So there are world experts for imaging the heart or the eye, esophagus, vocal folds, and so forth. So as opposed to trying to become the expert in every organ, what I do is I create the fibers in collaboration with these experts and they tell me the requirements. We design the fibers, and I feed the prototypes to all of these groups in the world. Even though I’m not working directly in cardiology or gastroenterology or in ophthalmology, I decided to specialize myself in fibers and I feed those fibers to the world experts. So far, in collaboration with Brett, we will have an impact on gastroenterology. With other colleagues we start to see this impact on a variety of fields, including ophthalmology, and lung disease, to name a few.”

This is the work that drives Castor Optics, a company she co-founded with her colleague, Pr. Nicolas Godbout. However, despite the success of her business, Caroline says, “I had no ambition to be an entrepreneur. It was a market pull type thing. We created the fiber coupler and published it and there were about five groups who were interested in the coupler and wanted to also publish about this research. And then five more groups were interested. And we realized we couldn’t spend our entire time replicating the information. So we decided to learn how to reproduce these couplers. We asked lots of questions about figuring out what to do with our technology and we listened.

We found several people who said that they would serve as mentors and share their expertise if we ever wanted to start a business. This was something I wouldn’t have done by myself. I had a lot to learn and the best thing to do is to find someone willing to teach you and to be willing to listen. We found three people who wanted to be our mentors and they became the co-founders of the company we have today. Again it was about finding people who were generous enough to share their recipe and mix it with different flavors and come up with a model that worked. It’s one thing to identify someone who does things well and another thing to have that person be generous enough to share their method and share discussions. That’s what makes the Boston microcosm so rich.”