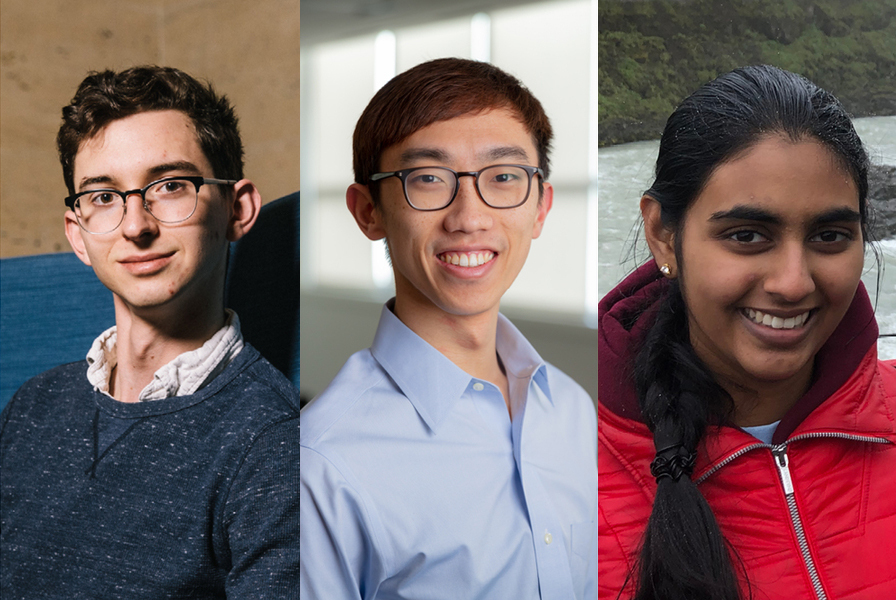 Left to right: MIT students David Darrow, James Diao, and Tara Venkatadri were named as 2022 Churchill Scholars and Kanders Churchill Scholar. They will commence graduate studies at Cambridge University in the fall.

MIT seniors David Darrow and Tara Venkatadri have been selected as 2022 Churchill Scholars and will embark on a year of graduate studies in the U.K. starting next fall. James Diao, a graduate student in the Harvard-MIT Program in Health Sciences and Technology (HST), received the Kanders Churchill Scholarship in Science Policy.

The Churchill Scholarship is a highly competitive fellowship that annually offers 16 American students the opportunity to pursue a funded graduate degree in science, mathematics or engineering at Churchill College within Cambridge University. The scholarship, which was established in 1963, honors former British Prime Minister Winston Churchill’s vision of U.S.-U.K. scientific exchange. Since 2017, two additional Kanders Churchill Scholarships have been awarded each year for studies in science policy.

James Diao is a third-year HST MD student. Originally from Sugar Land, Texas, Diao graduated from Yale University with degrees in statistics and data science and molecular biophysics and biochemistry. As a Kanders Churchill Scholar at Cambridge University, he will pursue a master’s degree in public policy. Diao's research aims to use clinical, genetic, and computational tools to improve health equity and outcomes for diverse populations.

Last year, Diao was awarded a P.D. Soros Fellowship for New Americans. Most recently, he was named to the Forbes 30 Under 30 List for his work to eliminate the use of race in kidney function tests. His research was cited by the National Kidney Foundation and American Society of Nephrology in their updated guidelines issued last fall. Previously, Diao developed algorithms for classifying cancer types from histopathology images at PathAI and for predicting cardiovascular fitness from wearable devices at Apple.

Diao’s first-author research has been published in the New England Journal of Medicine and JAMA and has been profiled in Nature and Science. In his spare time, he enjoys dumpling making and ballroom dancing.

Hailing from Wallingford, Connecticut, David Darrow is majoring in mathematics with minors in physics and German. At Cambridge University he will undertake an MPhil in scientific computing. Darrow aspires to become a professor of mathematical physics and do work in fluid dynamics or climate modeling.

Darrow began conducting fluid dynamics research in his senior year of high school as one of 17 students selected by the MIT PRIMES USA mentoring program. Since arriving at MIT, he has continued to engage in a diverse array of challenging mathematics projects. Among other work, he has researched internal diffusion-limited aggregation with Professor David Jerison, symplectic topology with Daniel Alvarez-Gavela, and protein folding with doctoral student George Stepaniants. Last summer, Darrow interned with the National Security Agency, and he will intern this summer with the U.K.’s intelligence and security organization GCHQ.

An accomplished polyglot, as well as an Eagle Scout, Darrow has pursued studies in German, French, Spanish, and Russian, and did a Spanish-language presentation of his work in the Budapest Semesters in Mathematics program. He has received several excellence awards for his German studies, and was named an Ellen Crocker Distinguished Scholar by the MIT Global Studies and Languages department.

Darrow is a committed mentor and tutor who is dedicated to inspiring and guiding the next generation of mathematics scholars. He is an active mentor to high school students with MIT PRIMES and participates in a mentoring program offered through the MIT Undergraduate Mathematics Association.

Venkatadri, who was a 2021 Barry Goldwater Scholar, has conducted research with Professor Richard Linares in the MIT Space Systems Lab, and is currently working with Professor Tal Cohen in her Nonlinear Solid Mechanics lab. In an internship with the NASA Goddard Flight Center, she identified potential lunar landing sites for future lunar missions, and later presented her work at the 50th Lunar and Planetary Science Conference. At SES Satellites, she developed programs to forecast power consumption for medium Earth orbit spacecraft. Last summer, Venkatadri worked at Boeing as a structural engineering intern modeling the forces on fittings that connect aircraft components.

Since her sophomore year, Venkatadri has mentored first-year students as an associate advisor, and has been a teaching assistant for the Experimental Study Group first-year learning community. Throughout college, she has been a violinist with the MIT Symphony Orchestra, and involved with the student group Singing for Service, which aims to connect with isolated communities through music. Venkatadri is a member of the Tau Beta Pi Engineering Honor Society.