Welcoming a new HST class in the Age of Covid 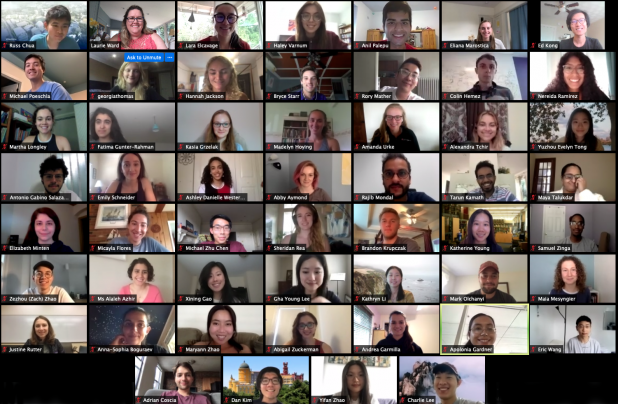 The incoming HST class includes a total of 52 students from Canada, China, Germany, Poland, Singapore, Spain, as well as the United States.

Incoming HST students reflect on the advantages and challenges of the virtual start of the school year.

Transitioning to graduate or medical school is a challenge ­– doing so during a pandemic, even more so. This year’s incoming Harvard-MIT Program in Health Sciences and Technology (HST) class will be facing that challenge, as many will be among the Harvard and MIT students taking classes remotely to begin the school year.

The incoming group includes a total of 52 students from Canada, China, Germany, Poland, Singapore, Spain, as well as the United States. There are 33 enrolled in the HST MD program, and 19 joining the HST Medical Engineering and Medical Physics (MEMP) PhD cohort. Interestingly, there is a similar breakdown by number in the gender profile of the incoming class, with 33 who identify as female (22 MD; 11 MEMP) and 19 who identify as male (11 MD, eight MEMP) joining HST.

Despite the unique nature of this year’s curriculum delivery, the new HST students we talked to say they are feeling resilient and optimistic.

Alaleh Azhir, an HST student enrolled in the MD program, admits that taking classes online will be an “adjustment” and that she’ll “miss the face-to-face experience of raising my hand and speaking with my peers.”

Azhir emigrated from Iran to the US when she was 14, and then earned her undergraduate degree from Johns Hopkins University, where she triple-majored in biomedical engineering, computer science, and applied mathematics and statistics. She then attended Oxford University where she received a master’s degree in statistical science.

Azhir, who is currently living in New York City, says she is concerned that online learning will create an obstacle to being able to quickly bond with her classmates. There is a bright side, however, as she says that the flexibility of online classes has allowed her to continue her summer position at AstraZeneca part-time, a company that has been working on a vaccine for COVID-19.

As classes get underway, Azhir says she appreciates how her HST professors are “supporting students” as all adjust to the online experience. They have done so with an approach of giving short breaks and sending students to breakout rooms, she says, “(This) has really helped in this adjustment process.”

She chose the HST program “because of its focus on the quantitative sciences and research. The idea of being able to continue my mathematical training at MIT and apply it to medicine at Harvard really attracted me.”

Xining Gao, a MEMP student, acquired a BS in materials science and engineering/biomedical engineering from Carnegie Mellon University. Having recently moved from New Jersey to Cambridge, she speaks for most students when she says, “I was looking forward to meeting people in my cohort, meeting people in the department…(meeting) faculty members…and beginning to make connections.”

She feels that the HST Orientation and virtual meet and greets have made the transition smoother: “Everyone's very welcoming…We can’t meet in person…so people have made more of an effort to be connected and reach out to (each other).”

Gao chose HST because of her passion for translational medicine, saying that she wanted to do research that is “more patient focused and…(to use) this research to create outcomes that are positive on our healthcare system and developing therapies.”

She says she was also attracted to HST because “It is a community (that is) unparalleled (from other graduate programs) because there is this huge network of clinicians, scientists, and engineers that are all being pulled together into this program… you get to interface with a lot of different people and the curriculum really facilitates a clinical mindset.”

Gao is grateful to all of the people who have guided and supported her on her educational journey, including graduate students, postdocs, and her PI at Carnegie Mellon – and she says it has inspired her goal of becoming a mentor herself: “They've been just completely phenomenal and life-changing to me as an undergraduate and I would like to pass this on…to younger students, specifically young women interested in STEM.”

Samuel Zinga, an MD-PhD student, graduated with a BS in chemistry and psychology from Emory University. Currently, he is living with his family in Atlanta, Georgia, while beginning his HST classes. Like many parents of young adults these days, his mom is overjoyed to have him home, and he’s happy to spend this extra time with his younger siblings and to be able to help them with their AP Physics and Chemistry homework.

Zinga is passionate about refugee and immigrant health. As an undergraduate, he worked in clinics that served mostly these populations. While he also tutored and conducted community outreach for refugees and immigrants, it was working in the clinic that most interested him. In fact, he says, “It was this clinical experience that got me interested in medicine in the first place,” and he hopes to continue to serve these populations in the future.

Zinga says that part of the appeal of HST were the students he met when he visited during the recruitment period. “During my revisit (to HST), I felt there was a really strong community of Black and Brown students here and we stayed in touch,” he says. “It’s been a really nice space, and community, to process all of the events that have been happening surrounding the racial violence in the country.”

Of remote learning, he says, “It’s definitely been challenging…I think the most challenging component is this lack of in-person interactions with other classmates. But our class has been really proactive about trying to engage virtually.”

“We do things like one-on-one pairings every week where you essentially have a coffee chat with another HST classmate,” Zinga says. “And we celebrate birthdays.” (Instead of cake, virtual backgrounds on Zoom are changed to reflect the festivities).

He applauds his HST professors for being very “intentional about what is the best way to (teach) virtually in a way that doesn’t contribute to Zoom fatigue…It’s been successful…(in that classes have) been broken down into smaller chunks of lecture with the inclusion of breakout room activities. It’s been a good way to keep us engaged.”

A warm (virtual) welcome to all incoming HST students!